Helios consists of multiple devices that enable the system to adapt to customer needs.

At present, Helios has got luminaire nodes for controlling lamps, tags nodes for direct interaction with lights, control unit nodes to control the electrical distribution panels and application servers to manage the network of lights and / or electric distribution panels.

Each lamp includes a radio device that makes it possible to regulate the light intensity manually, at a concrete moment in time, or automatically by preset time schedules. 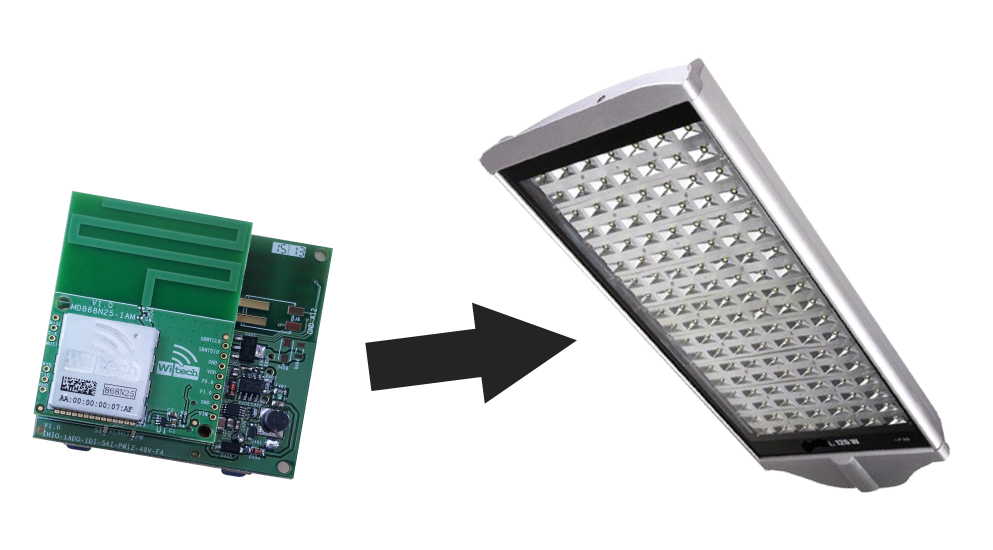 The only requirement for Helios is a dimmable lamp, either through current drivers, voltage drivers or by any supported protocol.

Each luminaire has two working modes, manual and automatic, you can toggle as required depending on the installation use. In manual mode, we set a fixed intensity value which will remain unchanged over time. In the automatic mode, the value resulting from the evaluation of the established time schedule is set.

In the automatic mode, the lights operate independently as they have an astronomical clock to evaluate the time schedules.

In either manual and automatic state, the value of the light intensity can be modified by the tag nodes action.

Luminaires, once characterized, are able to estimate their own consumption depending on the ignition time.

In case of lamp failure or malfunctioning, the luminaire nodes generate alarms to indicate the error status.

Radio devices that let you modify the lighting conditions of luminaires according to the operational installation needs. Thanks to the performance of these devices it is possible, for example, to maintain a minimum level of illumination and increase the intensity only in temporarily working areas with activity, which will help to reduce the consumption of the installation significantly.

There are different tag node profiles according to their functionality.

This tag node temporarily sets a lighting value for all the luminaries that are in his coverage radius. This solution is oriented to engage mobile elements that will be moving all around the installation. 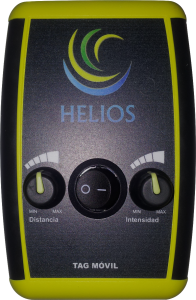 The luminaires under the mobile tag coverage radius got a preset level of intensity, independently of the assigned value, which provides a dynamic work area. After an interval of time without communication with the tag, the lights will return to the allocated state. Mobile tag has two hand controls, one to regulate the level of intensity of the lamps and the other to limit the range of the tag action.

Mobile Tag displacement through an office. Tag in the trolley at the entry

Mobile Tag displacement through an office. Tag in the trolley close to the output

It is noted as the illuminated area is moving following the movement of the mobile tag, and the lamps go off, after an interval of time, when out of range.

Mobile Tag displacement through an office. Tag out of the office

The mobile tag can set a time interval in the lamps before returning to the status assigned with a less intensity value than the initially set, in order to soften the loss of lighting.

This tag node sets the lighting value of the associated luminaires with the light intensity level measured in the work area. 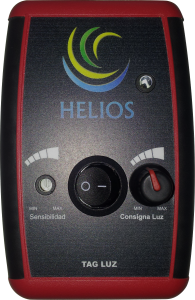 The light tag node has two controls, one for adjusting the light set point in the work area and other from sensitivity to adjust the range of the sensor to the light variability of the environment.

This solution is oriented to take advantage of natural light so that the lights adapt their illumination level to environmental conditions to maintain a constant level of intensity in the work area where the tag is placed.

When the ambient light is sufficient to fulfill the light set point, the luminaires are off and under ambient light diminishes, the lamps will increase the intensity gradually, while maintaining the minimum level required.

This tag node temporarily sets a lighting value to the associated luminaires when a presence is detected in the work area. 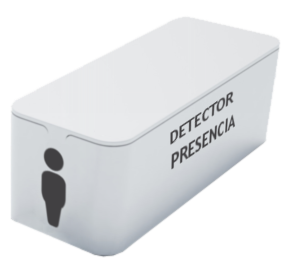 This device is used to illuminate punctually a transit zone by detecting independently presence tags in the same suite, after a time interval without any presence, the luminaires return to the assigned state.

You can set a time interval before returning to the assigned state with a less intensity value  than the initially set to soften the lighting without presence.

This node temporarily sets a lighting value to the associated luminaires according to a manual user action.

This device is used to illuminate a punctually area by user demand, after a time interval from the action, the lights will return to the assigned state.

Timer Tag. Off after 30 minutes

When a person activates the timer tag, associated luminaires are set to an intensity value (shown at 100% in the image above) and a time period is set (shown at 30 minutes) after which the lights go out.

You can set an intermediate time interval before returning to the assigned state with a less intensity value than the initially set, in order to soften the loss of lighting.

This tag node sets the lighting value of the associated luminaires according to the manual user regulation set. Using this device a user can set the desired lighting value in the work area.

The manual tag is composed of two controls, one for setting luminaires in automatic or manual mode and another to regulate the light set point.

When auto mode is selected, the intensity of the lights is determined by the time schedules and the manual tag has no effect.

When manual mode is selected, the intensity of the lights is determined by the light setpoint of the manual tag. Setting the manual mode, the action by other tags on luminaires is turned off, to prevent any change in the lighting values.

We can see a table comparing some features of the different tags: 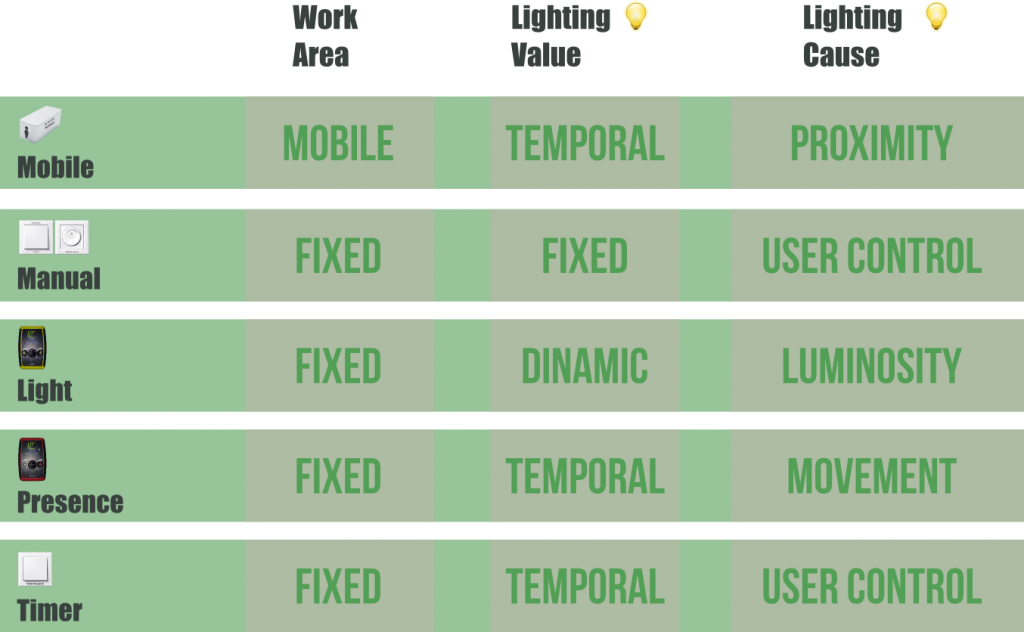 This node is a radio device included in electric distribution panels that acts on power lines, read the value of the electrical consumption meters and monitor the status of the probes and sensors.

The central unit can act independently on each of the power lines manually or automatically using time schedules. In automatic mode the control units operate independently as they have an astronomical clock to evaluate the time schedules.
This node provides access to the electricity meters value to know the consumption of the installation, Helios supports any commercial electric meter with pulse output and MODBUS RTU meters.

Using the control unit you can configure different probes associated with elements of the electric distribution panel, such as differentials, circuit breakers, etc., and sensors to detect possible alarms, such as open door detection, flood, fire, etc.

To detect anomalous consumption we use supervisors that monitor and report possible cases of error or malfunctioning. 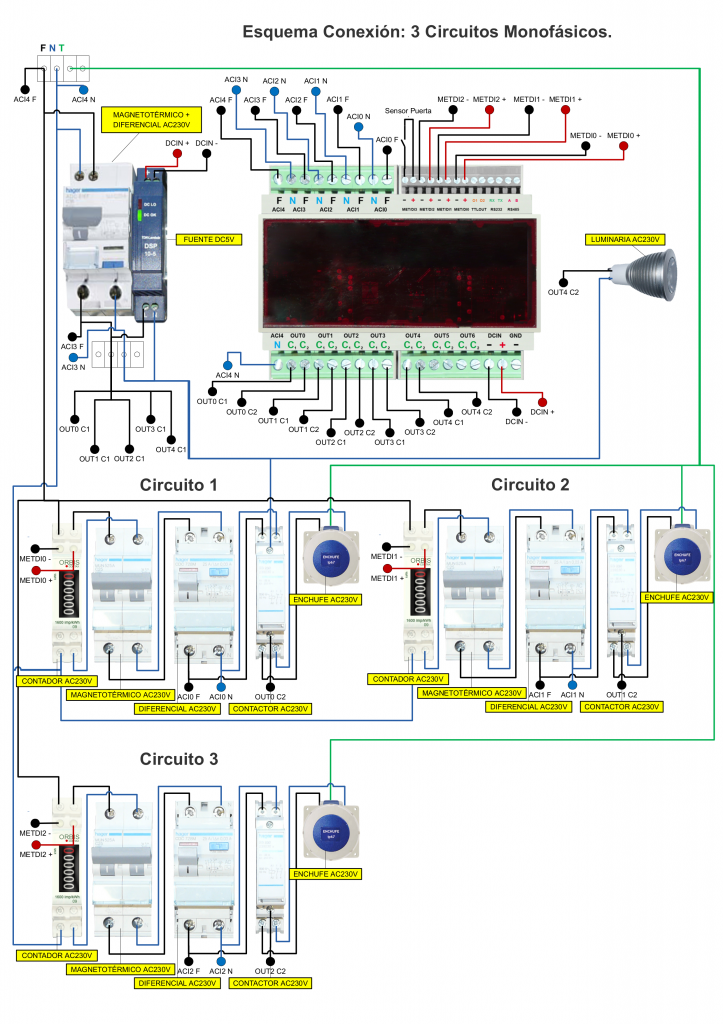 Connexion between the electric distribution panel and the central unit

Embedded server with TCP / IP connection that enables access to luminaire data and / or central units: consumption data, alarms, device states, etc. Includes a webservice interface with which you can access all the information for integration into external applications

The server has a free band radio interface whereby a network of luminaires and / or central units is created allowing the automatic collection of data and command sending. 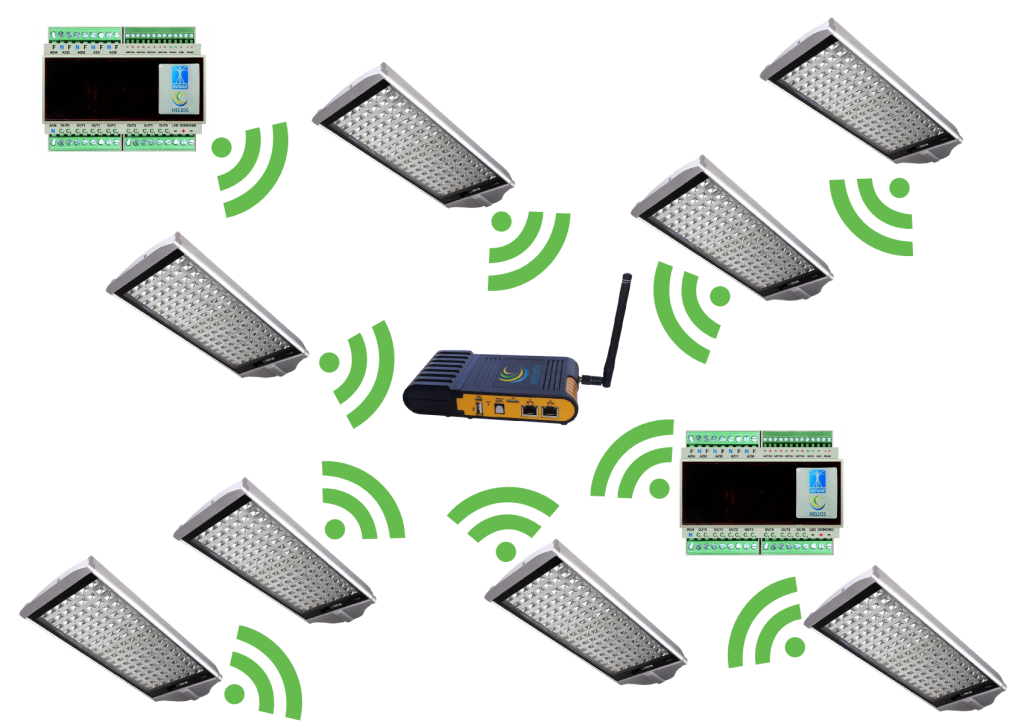 Transferring data to the application server via radio communications

Data from the network of devices are transferred node by node up to the application server using radio communications. The network node is exempt from planning, so installation and maintenance are very simple and the topology is created automatically: adding new devices is immediate.

Each instance of the Helios network or node island can contain up to 1500 nodes and a maximum depth of 25 levels depending on the installation conditions.

The application server is recommended when you want to control and maintain a status registration of the installation: for consumption management, alarm display, etc. It even allows notification via e-mail or short messages system alarms.

However, the application server is not required to Helios, the system is fully functional without it since the system intelligence is distributed between devices that work autonomously. There are many scenarios where it is sufficient with luminaire nodes and / or central unit nodes and / or tag nodes to complete the desired functionality.

Helios has an intermediate server whereby using a TCP / IP (3G USB modem or ethernet) connection allows data integration in the application server from those devices that are not part of the network. 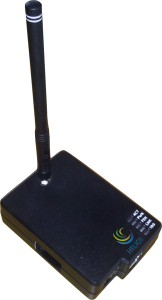 This server is useful for installations without enough device density to create a wireless network that covers all devices or when you want to control several “islands” of devices without wireless interconnectivity between them.

Communication between the intermediate server and the application server